As Lumen Gentium 2 (Dogmatic Constitution of the church) rightly says, "The nature of the Church is to be missionary" so faithful had been our diocese to this statement of the 2nd Vat council.

Revisiting again the road, which we had traveled centuries back, it brings pleasure and sweet memories to cherish. We will be failing in our duty, if we do not mention about our former bishops and priests who sowed the seed of faith amidst severe trials and tribulations. From the early 16th century the definite and historical history of the Coimbatore mission starts, as part of the Madurai Mission of the Jesuits. Fr. BALTHAZAR Da COSTA, a Jesuit Missionary of Madurai Mission, came to Sathyamangalam ( then in the territory of Coimbatore in 1643 and obtained the permission of the Nauvab of Sathyamangalam, to preach the faith. He had also a Catechist, Peter Xavier to help him. Fr. E.M. MARTINEZ . S.J. took charge of this new mission in July 1648. These Two were the pioneers of Coimbatore Mission with other Jesuit missionaries, though in a trickle, Catholic faith began to spread in the area rapidly, inspite of great opposition from the Linkayat Yogis.

This Missionaries had their head-quarters at Kanuvakarai near Sathyamangalam and from there they spread the faith, to Karrumathampatty, Coimbatore, Savaripalayam etc by 1650, with great success. But with the suppression of the society of Jesus by Pope Clement XIV in 1773, and forced the departure of the Jesuit missionaries, the flourishing mission and its flock were left without shepherds. To make matters worse, the persecution and Mysore wars of Tippu Sultan, destroyed all the churches and Christians were either scattered or also many forced to embrace Islam. Thus the early Christians of our mission had their early Baptism of Blood.

It is to remedy this sad situation, the Society of the Propagation by its decree of 1775 asked the Paris Foreign Mission Society to take charge of the whole area, looked after by the Jesuits, to gather the scattered flock and to rebuild a new the mission, till 1845 On 3rd April 1845, Karumathampatty came to be the Headquarters of Coimbatore diocese. Coimbatore, which had been the part of Pondicherry Archdiocese so far, was separated and given an identity of its own as Pro-Vicariate in Karumathampatty from 4th October 1846.

As a hallmark, Most Rev. Dr. Marion Bresillac was consecrated as the first Bishop of Coimbatore on 4. 10. 1846. In remembrance of his native patron St. Michael, he decided to dedicate the diocese and its Cathedral to St. Michael and so it is the St. Michael's Cathedral now. He also planned to construct the Cathedral as the replica of St. Peter's Basilica in Rome. When the design was planned accordingly, His Lordship laid the foundation stone for the Cathedral in 1850, in Coimbatore. The construction of the Cathedral took 17 long years and it was successfully completed with the help of Propaganda Fide, which offered 50,000 franks and it was blessed by Most Rev. Dr. Depomier, the third bishop of Coimbatore on 28th April 1867 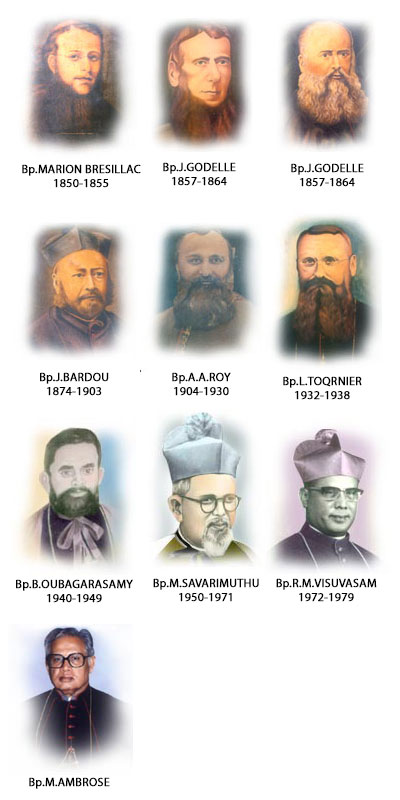 When the Coimbatore diocese was still an infant in 1846, there were no Indian priests, no institutions and no establishments. The diocese had only four foreign missionary priests namely, Rev. Frs. Metral, Goust, Bacreau, De Gelis who found it very tiresome to visit the Catholics and administer Sacraments to them, for they had to travel long distances without proper conveyance.

Bishop DEPOMIER ( 1864 - 1874 ) was succeeded by Mgr. BARDOU ( 1874 - 1903 ) who was the first Bishop to be consecrated at the new St. Michael's cathedral on 30.04.1874, as the Vicar Apostolic of Coimbatore. When the hierarchy of India was established by Pope Leo XIII on 1.09.1886, the Vicariate Apostolic of Coimbatore was erected into a Diocese and thus Mgr. J. BARDOU, became the First Bishop of Coimbatore. The first diocesan Synod was held at St. Michael,s Cathedral on 24- 25 August,1891. The Silver Jubilee of his Episcopal Consecration of Mgr. BARDOU was celebrated in 1899 and as mark of honor, the Holy Father appointed him as Assistant Prelate to the Pontifical Throne. He died on 7.02.1903. Mgr. DENIS PERYARMALE was elected to succeed him lost he died on 17.08.1903, before he could be consecrated.

Msgr.AUGUSTIN ROY was consecrated as the Bishop of Coimbatore on 12.02.1904. After ruling the Diocese for 27 fruitful years, he resigned due to ill - health and he died on 21.12.1937 at Theodore Sanitarium and buried there. His mortal remains were brought to Coimbatore and buried in the Cathedral on 25.05.1897. as a gesture of gratitude.

Msgr.L.TOURNIER was consecrated on 13.04.1932 and due to ill - health he resigned on 2.03.1938 and died at St. Martha's hospital,Bangalore on 18.05.1935. His body was interred at St. Michael's Cathedral. Very Rev. Fr. L. BECHU was elected as Vicar Capitular and it was his privilege to realize the dream of the Paris Mission Society, to plant, to develop each Mission and then hand it over to the native Clergy. After dividing Coimbatore Diocese by attaching the territory, North of River Bhavani and Moyar to Mysore the rest of the territory was handed over to the indigenous clergy by the Decree of S. C. of Propaganda, dated 13.02.1940.

A new beginning dawned to the Diocese, when Most. Rev. Dr. Ubagarasamy a priest of the Archdiocese of Pondicherry became the Bishop of Coimbatore. He was consecrated on 25.07.1940 at Coimbatore. He was the first Indian Bishop to be appointed in Coimbatore. He founded the workers association and arranged Sundays be declared as government holidays by all the mills. He encouraged the Presentation Sisters to take up the medical work and founded many schools and hospitals in the diocese. The diocese started to see a new dimension, when Most. Rev. Francis M. Savari Muthu, a native of Coimbatore was consecrated as the Bishop of Coimbatore on 26.04.1950. The Bishop participated in the 2nd Vatican Council.

Next the Most. Rev. C. M. Visuvasam a priest of Madurai Archdiocese was consecrated as the Bishop of Coimbatore on 3.5.1972. As a man of vision and action, he planed and laid the foundation stone for Jeeva Jothi Ashram, which stands as the pride of our diocese to this day. He bought many new lands and built many new buildings and presbyteries. He tried to re-organize the Ecclesiastical administrative structure. The diocesan Pastoral center was his great achivement, to give a new life to the Pastoral Ministry. He encouraged and helped the Presentation Sisters and Brothers of St. Michael to stand on their own legs. He died in Belgium on 2.6.1979. His body was brought back to India and buried in the Cathedral.

In 1980, Most. Rev. M. Ambrose, the second son of the soil, belonging to the cathedral Parish, was installed as the new Bishop of Coimbatore. He was transferred from the Diocese of Tuticorin and under his guidance, the diocese found a bright dawn in all spheres. He celebrated his Episcopal Silver jubilee on 8.12.1996. To commemorate his silver anniversary and the 150th year jubilee of the diocese, the portico of our cathedral was constructed and blessed on 26.01.1997. He was the first Indian bishop to get retired after shepherding the diocese for 22 years. At the age of 75, he submitted his resignation to the Holy See in July 2000, which was accepted in July 2002 at the appointment of the new Bishop, Most Rev.L. Thomas Aquinas on 10th July 2002.

The diocese has just commenced a new age of growth under the guidance of the New Bishop. He was consecrated on 28.08.2002 .Most Rev.L.Thomas Avinas in a grand consecration ceremony which took place in the Cathedral.

Stay connected with our network!